the cure// play for today// staring at the sea: the singles

fredrick lonberg-holm// morton gets the urge// V.A. Alphabetical Uploads of Whacked Out Singles

stew and the negro problem// submarine down// post minstrel syndrome

bow roethke// crossing lines// what was a scare

nina simone//turn! turn! turn! (to everything there is a season)//to love somebody

grace jones//slave to the rhythm

Below are pictures of the Greer Lankton view finder that I still have from the Cranbrook Art Museum’s installation of “It’s all about ME, Not You” exhibit  from 1998.

Below those are a poem that I wrote about the exhibit. The poem won a contest in a local magazine called The Contemporary Muse, which was coming out of Port Huron, MI and thinking of itself as telling people about “blue water area art.”

Thanks to Andrew Durbin whose recent article with Paul Monroe, “Unalterable Strangeness,” inspired me to take pics of the reminders of this early love and share them.

I was 17 years old when I was in this room. It was at that show that I also learned about Nan Goldin, whose “Ballad of Sexual Dependency” video was installed near Greer Lankton’s one-room house. This stuff (their work) created attachments for me I didn’t know I had/ needed/ wanted.

I wrote another poem about Greer Lankton where I shouted, Allen Ginsberg-style, “Greer Lankton! Greer Lankton! At night I can hear you snore! I’m wide awake! Greer Lankton!” Not that I knew anything about the sounds she made while sleeping, but she stayed with me long after I left this room.

Surely there are things I didn’t understand or that I misunderstood that are evidenced by my 17 year-old-writer self. Surely she was saying something to me, though, and I had heard her well enough. 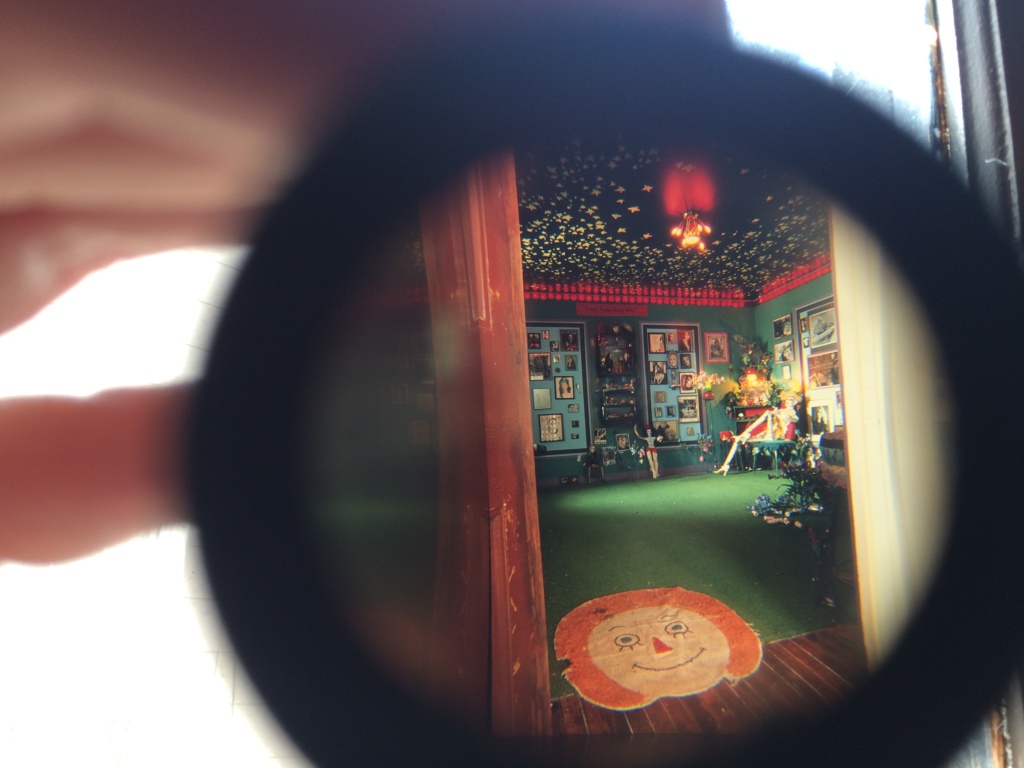 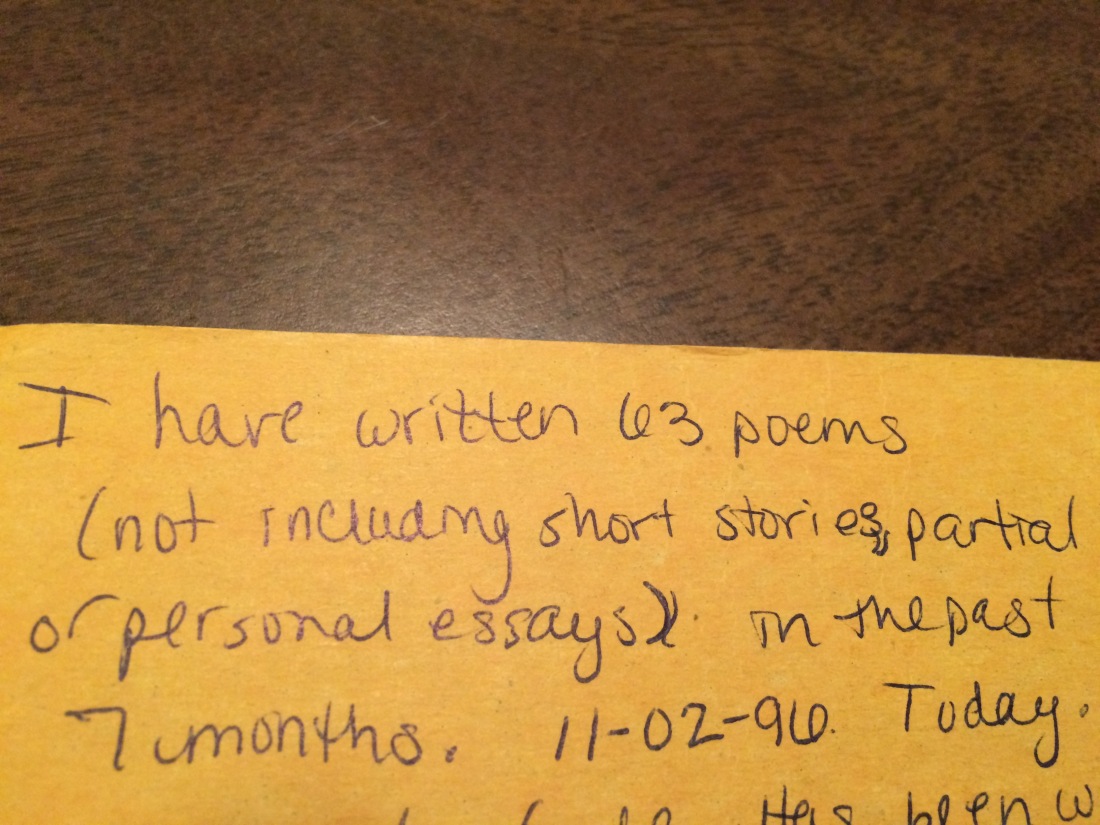 I had a dream last night that I didn’t know who my family was. In fact, everyone’s families were confused, overlapping, misdirected, misidentified. I introduced Pascal’s parents to my parents. His parents were French-speaking Canadians from Montreal. My parents were Chinese, yet French-speaking. In another version, both sets of parents belonged to him, and I had just met his mother who wanted to return to China because her business had been burned to the ground. She was sick of trying to make a life for herself here. She said I should come to the East sometime. I told her that I’d been to Taiwan many years ago. She said China was different.

Everyone’s homes had been set on fire. My childhood friend wanted to know if I was going back to my charred house and, if I was, could I get a chair for her that she liked? I didn’t think there was anything left. She wanted the Eames chair that belonged to my grandparents; I wanted to see if any of the books or papers were salvageable. I realized the loss of my books and writing would be the hardest thing to replace, that I could never remember everything that I’d owned.

A different childhood, in real life: a friend’s mother has just died. I’ve called to make a donation for the funeral. I realize that my dream is an indication of the confusion of families. There was a time when I felt myself to be a part of many other families, much more than my own.

postscript: I’ve just called my dad. There is something in all of this that we are able to share.

I’m supposed to be writing a book called Dreams, so today I searched my computer for “dream.” I typed out the names of all the files that apparently have something to do with “dream” and then I read the whole list. It took 18 min 59 sec to read the list and took a long time to type the names of the files. I wanted to type them so that I could read them as if I’d wrote them. (All the noise in the background is a fan.)

Below is a letter I wrote to political activist and poet, Marie Buck. It is is in response to her response, “Organization and Aesthetics,” to Josef Kaplan’s piece, “Theses on an Aesthetics of Violence.” She’d sent me an email asking for my thoughts, but since I was in Harpers Ferry , WV, I couldn’t reply then. I don’t have a firm position on the following questions, but it’s not for lack of wanting one.

I’ve read your post, “Organization and Aesthetics,” and caught up with the Josef Kaplan piece and interview. Thank you for writing me and asking my thoughts on it. Since we have such distinct relationships to political action, meaning you are politically active and I am not (I don’t believe) in your assessment (?), I’m happy that you thought of me/ my brain. I’m sorry I couldn’t respond sooner and now this feels belated, given the speed of conversations on the net. But that’s OK. These are ongoing conversations.

What seems sorely missing from your (and Kaplan’s) assessments of poetry, art, and politics is teaching (yet when I say this I recall how constrained graduate students felt in the classroom during the demonstrations in Madison). [There is no purified space for political organizing, right? I don’t know how to answer my own charge that teaching should be part of this conversation except that it is a context in which people are learning how to convince each other of what they think are good ideas to greater and lesser degrees.] I completely disagree with Kaplan that an engaged intellectual community can form around a knitting circle in an analogous way to that of a group discussing poetry, unless the knitting circle is also reading or makes it a point to discuss cultural objects or they analyze the forms in which patterns are made and distributed, etc. A group (knitting or not) discussing Mary Oliver, if they are a group of working-class, first generation college kids will, in my experience, call that shit out as uninteresting because it has nothing to do with their lives and say, “Next!” But, in my experience, they will glimpse a strange optimism in Harryette Mullen’s writing that makes them want to know a whole lot more about how the culture and language they live in has shaped them and how they might want to shape it in return.

A poem cannot make a decision, but, importantly, it takes a really fucking long time for humans to make decisions, or at least some humans, including myself, which makes us not unlike poems, given that some of us never get around to making the decisions we mean to make. (How have we been plummeted into an Enlightenment conversation about the will-to-act?)

My point is not to be round about here. My point is to be clear. What is “genuine political action”? Does it not involve reading, writing, and discussing the practices we deploy to read and write? Since when are reading and writing well enough to make convincing arguments so different from speaking well enough to make convincing arguments? Isn’t this conversation, then, also about audience? Who do you want to organize? How are they available/ open to organization? What if you organized the poets and artists in Detroit? Are they more or less organizable than the workers at Thorn Apple Valley? I’m just thinking out loud here. There’s so much that I don’t understand about the ground for conversations about political action and why such clear, righteous pathways must appear before us.

When I gave my paper at Orono about rethinking how Language poetry is political, I produced a reading of Barrett’s poem Progress and some early Language poetics. I chose to read the poem’s “message” quite differently than anyone had before, and I hope to keep reading in the way that I do and convince others that the way I read is worthwhile. I read the poem in terms of its overwhelming representation of force. What I might say is political about this reading practice is its attention to unseen effects and affects. What could be useful about this reading practice is its transferability to listening (in a meeting?) and grabbing the trails of effects that are created by lots of bodies in rooms. Collecting those and showing them to ourselves and others when we get hot-headed and the discussion starts to break down. Tracking these so we might know, as a group, why we’re not able to make a decision that we desperately need to make to alleviate suffering? (Does such a singular decision exist? Well, not really. If I were willing right now, I’d read the desire for such a singular decision as one thing that determines inaction. Everything takes so damn long and our lives, our deeply personal, individual lives are coming to a close. We must make openings!)

What’s the translation from reading to action? I bet I could (and one day will) take my reading habits into rooms of people that are not all scholars (or scholars-in-training or psychoanalysis or whatever teeny-tiny groups I’m oriented around), and use them to help people do things. But I’m not sure people can do things as well as we’d like them to and maybe some poems can help us think through inaction in order to put our feet on the street?

I’m being cute, but here’s something not cute. I was just in Harpers Ferry, WV and was reintroduced to the enormous importance of Harpers Ferry to the history of African-American political action and the fight against slavery. [It’s taken me a very long time to come up with the next sentence. This is because this country is still so fucked up. An address by W.E.B. DuBois in the earlier part of the century is cited in one of the exhibits with a list of demands for African-American liberation and the list could still be read today, meaning those demands/ needs for equal participation have not been met]. John Brown and twenty-one (?) men seized one of the two largest arsenals in the United States. Their plan, it seems, was to take weapons from the U.S. government and distribute them to slaves that joined their army as they traveled through Virginia. U.S. soldiers surrounded them, though, and they never got out of Harpers Ferry. The story about John Brown’s raid, the most mundane version I think, is that it failed. But Frederick Douglass said something like, it may have been one of the most important events leading to the ending of slavery. A failed raid is not a poem but, now that it’s history, it’s also not political action (which implies now, right?). It’s a fucking amazing story with consequences that historians are still debating over.

I don’t have a final point to wrap up with. Disappointing, I know. I’m not married to the idea that poems or art do something SUPER DUPER SPECIAL THAT NOTHING ELSE CAN. Not at all. I’m highly suspicious of it. But I know reading and talking about them does things and I imagine that that doing stretches and expands. This is a terribly disappointing ending to an otherwise interesting letter. If poems aren’t political all by their lonesome, maybe the stories we reproduced as a result of our reading practices are? Meaning, isn’t choosing what stories to tell and to whom a kind of political action? Isn’t that, partially, what organizing is?

With love to you and your brain,